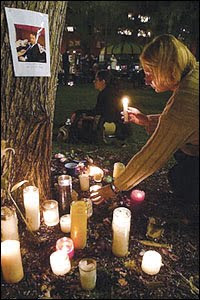 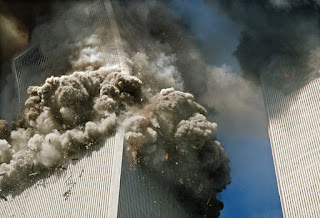 I know exactly where I was when I heard that something had struck one of the Twin Towers on 9/11/01.  I had a scan of my gallbladder scheduled (what fun, huh?) and I was in the waiting room watching the early morning news. There was talk that a plane, perhaps a small one, had hit the North Tower. The hole seemed big for a private plane. I remember telling the technician to catch the news, something was going on in NYC.
I went home and by then the second plane had hit and it was obvious what had occurred.
I called my office to make sure they were aware. We keep popular radio on but not TV. Oddly, I had brought a tiny 7 inch TV to work just a week or so before saying that you never know when you'll want to catch something on TV (we do live in tornado alley!). They had grabbed the little TV after a patient told them what happened.
Next, the Pentagon. Panic struck even more. My daughter was a nurse in Bethesda at the National Institutes of Health but live right in downtown DC. I couldn't reach her by phone, couldn't reach her partner, you couldn't reach anyone by phone.  I sent an email to someone I had previously had a relationship with, who was a journalist in DC and asked if necessary, would he get to her house to check on her?  I knew he would be tremendously busy, but I also knew he'd do it if necessary. I'd keep trying by phone until I couldn't stand it any longer.
I had a class to teach that afternoon.  It was all we could do (all of us) to get through our material and get back to the news coverage. They were very kind and sympathetic as I checked my phone regularly for news of Amy. To this day, those who were there bring up that year's training.
She was fine and later emailed me.  (Huge sigh of relief!) She did not go into work and was told not to come unless contacted. Those already working would stay on indefinitely.  Traffic was a mess as you can imagine and the city was practically under military control.  For a long time after, if driving on to NIH property, your car had to be inspected, as with all government facilities.
Her partner was scheduled to meet with a man at the Pentagon to discuss work that her company was doing with them.  That man died in the Pentagon attack. Such a strange feeling.
Everything was strange after that. Nothing really ever the same. Skylines, air travel, points of time references..... My niece, who had worked in one of the Twin Towers on the hundredth-something floor, had not long before changed jobs and moved out of NYC, my sister-in-law was there in NY that day and had a time of it returning to Texas with air traffic grounded, the endless names and faces of those missing and searching, oh, so sad.
I flew to DC not a month after 9/11. One of the strangest trips I ever made, eerie really.  Security so different and tight, but still in the infancy of its change. Odd what they would and wouldn't let you through with, still true in some ways.
I remember as I drove through the city, damage to the Pentagon still so raw, ground to air assault weapons placed everywhere, helicopters everywhere, men with guns everywhere all so surreal.
I'm mindful today of how things can change in a second......forever.....and mindful of all of us, changed forever by that attack.
Posted by Beth Akins at 1:22 PM No comments: